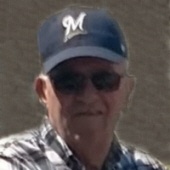 Arlyn “Sonny” Bauer, age 91, passed away peacefully with his family by his side on Thursday, September 17, 2020. He was born on August 15, 1929, at the farm in West Bloomfield. He was the son of the late Edward & Ida Bauer. Sonny was united in marriage to Joyce Mae Konow on April 18, 1953, in West Bloomfield at Christ Lutheran Church. Together Sonny & Joyce were farmers in the West Bloomfield area while raising seven children. Sonny also worked construction and butchered at Little River Meats. After he retired, he and Joyce traveled in their motorhome, including their annual trips to Arizona. After settling down, Sonny & Joyce resided in New London for their remaining years together. Joyce passed in January 2019; they are happily reunited in Heaven.

Arlyn is preceded in death by his parents, his wife Joyce, and grandson Cody Loehrke.

The funeral for Arlyn will be held on Monday, September 21, 2020, at 1:00 pm at Christ Lutheran Church, West Bloomfield with Rev. Brian Roehrborn officiating. A visitation will be held directly at the church on Monday from 11:00 am until the time of the service. Burial will be in Concordia Lutheran Cemetery, West Bloomfield. For those attending, please allow for social distancing and wear a mask. Arlyn’s service will be recorded and a link will be placed on his obituary page on our website, for those who are unable to attend.