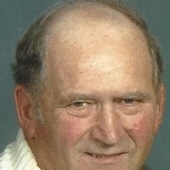 Arlo James Wichmann, 77, of Weyauwega passed away peacefully at home with his wife at his side on Sunday, June 12 2016 due to complications from existing health issues.

Arlo was born on November 15, 1938 in Caroline, WI, the son of Richard and Ahli (Papendorf) Wichmann. He graduated from Clintonville High School in 1957. He married the love of his life, Janice (Bauer) on March 23, 1963. They were happily married for over 53 years.

Arlo was a dairy farmer for over 50 years. He was very proud to have won the Progressive Farmers Award. He hosted the Weyauwega-Fremont FFA Breakfast on the Farm in 2000. Arlo served his country as a member of the National Guards in the 32nd Division. He was active in the community for much of his life. Arlo was a member of St. John’s Lutheran Church in Weyauwega and served on the church council for over 40 years. He had been 4-H leader at Baldwins Mills 4-H Club. After retiring from milking cows, he drove school bus for the Weyauwega-Fremont School District.

Arlo is survived by his wife of 53 years, Janice and his four daughters: Jane (Rick) Olson of New London, Lisa (Paul) Dailey of Weyauwega, Erin of Green Bay, and Sara (Erik) Wagner of Waupaca. He is also survived by six grandchildren: Brooke and Courtney Olson and Jordan, Lauren, Kirsten and McKenna Dailey. Additionally, he is survived by his sister, JoAnne (James) Wulterkens, many nieces and nephews, close friends and his beloved dog, Buddy. He was preceded in death by his parents and his brothers Wayne (Erna), Richard, and infant twin brother.

The funeral service for Arlo will be held on Wednesday, June 15, 2016 at 11:00 a.m. at St. John Lutheran Church in Baldwins Mill, (N3882 County Road KK, Weyauwega) with Rev. Roger Nielsen and Rev. Al Moen officiating. Burial will be in Baldwin's Mill Cemetery, Town of Royalton. A visitation for family and friends will be on Tuesday, (TODAY), June 14, 2016, at the Cline-Hanson Dahlke Funeral Home in Weyauwega from 4-7pm. and on Wednesday at the church from 9:00 a.m. until the time of the service.

In lieu of flowers, a memorial fund has been established in Arlo’s name.

The family would like to thank Gold Cross Ambulance Service and first responders of Waupaca County. They would also like to give a special thanks to Tom and Sandy Schneider, Gary and Sandy Schafer, and Pastor Roger Nielson.

To order memorial trees or send flowers to the family in memory of Arlo James Wichmann, please visit our flower store.