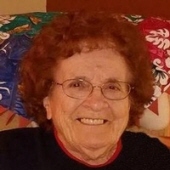 Ardyce married Jesse Rice Jr in 1942. They owned and operated Breezy Lane Farm near Ogdensburg until 1971.

Some of Ardyce’s many talents were cooking and baking. She became food supervisor at the Manawa Community Nursing Center for 17 years, part time cook at Manawa High School and Cedar Springs Golf Course.

Ardyce had been a resident of the Manawa Community Living Center for three years.

Ardyce’s family would like to thank the staff at the Manawa Community Living Center for their wonderful and loving care. They would also like to thank Southern Care Hospice for their kindness and compassion.

A gathering of family and friends will be held on from 2:00 p.m. until 5:00 p.m. on Tuesday, March 19, 2019 at Cline-Hanson-Dahlke Funeral Home in Manawa. Burial will be in Park Cemetery, Township of St. Lawrence.

Cline-Hanson-Dahlke -Manawa
To order memorial trees or send flowers to the family in memory of Ardyce Mae Rice, please visit our flower store.