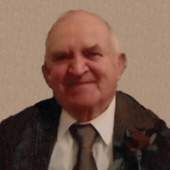 Arden Leon Kirst, age 86 of Fremont, completed his journey to his heavenly father on Sunday, January 12, 2020, at home surrounded by his family. Arden was born on December 16, 1933, in Green Lake WI. He served in the US Army from 1956-1958 as a Morse Code Operator. He was united in marriage to Laurel Guderski on June 11, 1960, in Markesan. Arden worked for many years as a salesman for Centry Hardware and finished his career at Sturms Foods in Manawa in the maintenance department. His favorite pastimes were hunting, fishing and putzing in his garage or basement. Arden was an avid Green Bay Packers fan and enjoyed listening to the Milwaukee Brewers on the radio. He enjoyed spending time with his family and was incredibly involved in his grandchildren’s activities. He will be remembered for his great sense of humor, his patient and gentle nature, his love of hunting and fishing, his deep, unwavering faith and his willingness to help anyone at any time.

Arden was preceded in death by his parents, Robert and Adeline (Klettke) Kirst; brothers, Waldemar, Kenneth and Marlyn; brother-in-law, Kevin Guderski and a grandson, Christopher Cuadra.

A gathering of family and friends will be from 9:00-11:00 a.m. on Thursday, January 16, 2020, at SS Peter & Paul Catholic Church in Weyauwega, followed by a Mass of Christian Burial officiated by Fr. Matthew Rappl.