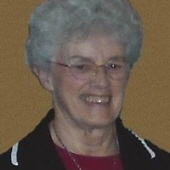 Anita Leona Drath, age 86 of Manawa, went to her heavenly home on Monday, January 22, 2018 at St. Joseph Residence in New London. Anita was born on February 8, 1931 in the Town of Caledonia to the late Edwin and Amelia Krenke. On August 23, 1952 she was united in marriage to Howard Drath. He preceded her in death in 2010. Together they celebrated 58 years of marriage. They owned and operated Drath Sewing Center for over 50 years.

Besides her parents and husband, she was preceded in death by a brother, Alvin Krenke; brothers-in-law, Ordell Drath and Leroy Ruppel; sister-in-law, Lucille Drath and great-grandson, Luke Drath.

The funeral service for Anita will be held at 11:00 a.m. on Saturday, January 27, 2018 at St. Paul Lutheran Church in Manawa. Rev. Nathan Reichle will be officiating. Visitation will take place directly at the church from 9-11 a.m. Burial will be in Little Creek Cemetery, Town of Little Wolf.<iframe id="tukios_player_512x330" allowfullscreen="true" allowtransparency="true" frameborder="0" height="330" scrolling="no" src="https://www.tributeslides.com/videos/embedded_video/27HMGRL49P3CSDXZ" width="512"></iframe>

To order memorial trees or send flowers to the family in memory of Anita L. Drath, please visit our flower store.