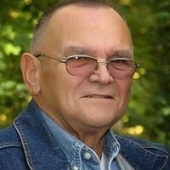 Alick Albert Chambers Jr., age 79, of Waupaca, formerly of Manawa, passed away on Sunday, July 30, 2017 at Theda Care Hospital, Waupaca. He was born on May 19, 1938, in Monroe County, Wisconsin, son of the late Alick Albert Chambers Sr. and Helen (Jerdee) Chambers. In July 2, 1955, he was united in marriage to Catherine Gabrielson. They later divorced and he then married Pat Jepson of Manawa. Al farmed with his dad for three years and then bought a farm in Soldier’s Grove and farmed there for four years. Al and his dad started a carpentry business and worked at that for four years. He then started working in the telephone industry with Kilorn Construction; then universal in Sparta before moving to Manawa and working for Manawa Telephone Company from 1966 to 1993. He also ran his own business called Alcom. Al was in the National Guard from 1954 to 1959. After moving to Manawa, he was involved in the Jaycees, Amway, archery, Snowmobile Club, EMT, and the fire department. Al took three trips to Canada hunting bear with Dean Samualson, Don Fahser, Gus Mundt and Mel Meyerhafer. He also took many trips with a beloved brother-in-law Gene Peterson of Viroqua, and his sons Chuck, Rick and Jim.

He was preceded in death by his parents and wife Pat, and hunting friends Roger Klinger, Craig Shambeau and Don Fahser.

There will not be a formal service for Al but a gathering of family and friends to celebrate his life on Friday, August 4, 2017 from 4-7 p.m. at the Cline-Hanson-Dahlke Funeral Home in Manawa.

To order memorial trees or send flowers to the family in memory of Alick A. Chambers Jr., please visit our flower store.