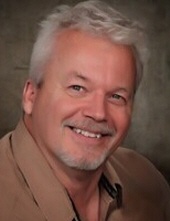 
Alan "Al" Tessen Alan Lee Tessen, 62 of Manawa, Wisconsin passed away on Wednesday, February 17, 2021 due to complications from Acute Myeloid Leukemia. Just like he dealt with all experiences in life, Al managed his illness with strength and courage, and wanted to spend as much time with his loved ones as possible. Al attended Little Wolf High School. Al was an incredibly talented man who turned his passion into a career with starting Al's Paint and Body, where he took pride in designing one of a kind creations. In his spare time he enjoyed attending car shows, playing softball, pool, bowling, golf, and corn-hole. Al was an avid collector and loved spending time riding his Harley. He was also a stone cold lady killer, and the best Elvis impersonator in the Midwest. On his final day, Al was surrounded by his wife Sherry (Warning) of 27 years and his children Kelly (Travis) Gust, Niki Leschke (Brad Butkovich), Kyle (Kym) Tessen, Philip (Molly) Leschke, and TeLesha Tessen. His greatest joy was his grandchildren Owen, Callen, Audrey, Max, Grayson, Theo, Finn, along with an additional toasty bun in the oven. He's also survived by his mother Janice (Piotter) Tessen; his brothers, Randy (Jennifer) Tessen, Mark Tessen, Bill (Lisa) Tessen, Scott (Sara) Tessen, Mike Tessen; his sisters, Cathy (Tim) Schultz and Wendy Tessen. He is further survived by numerous nieces, nephews, in-laws, other relatives, friends, and furbabies. Al is proceeded in death by his father Charles (Chuck) Tessen, an infant brother Robert Tessen, and grandparents. The family would like to express their sincere gratitude to the members of the Froedert Cancer Center, especially Dr Runaas, as well as the dedication of Dr Houlihan and team. We are especially grateful for all of the support from those who provided care and love to Al over the last 2 years. A memorial service will be held honoring Al on Friday, February 26, 2021 at 4:00 pm at Bear Lake Resort, with a celebration of life to follow until 7:00 pm. In lieu of flowers, memorial contributions can be directed to the Al Tessen Benefit fund with Fox Communities Credit Union at 1302 N. Shawano St., New London, WI 54961. Cline-Hanson-Dahlke Funeral & Cremation Care of Manawa is assisting the family with arrangements.

Bear Lake Resort
To order memorial trees or send flowers to the family in memory of Alan Tessen, please visit our flower store.