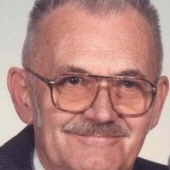 age 86, of Weyauwega, passed away on Thursday, May 19, 2011. He was born in the Town of Wolf River on August 20, 1924, to Edwin and Martha Fink (Krenke). Wayne was baptized at St. John's Lutheran Church-Wisconsin Synod in East Bloomfield, on August 24, 1924. He grew up in that area and later moved to Weyauwega. Wayne attended St. Peter Lutheran Elementary School. He was a member of St. Peter Lutheran Church( WELS), where he was confirmed in the Christian faith and remained a lifelong member. Wayne proudly served his country during WWII in the United States Army; he was stationed in Korea. On September 28, 1947 he married the love of his life, Verona Behnke, in Manawa, WI. Early in their marriage Wayne worked for Louie Lautenschlager's filling station and Ray Akey's Shell. He then drove milk truck for Wagner's Weyauwega Milk Products for many years. Wayne and Verona enjoyed yearly vacations visiting her sister and her family in Illinois, and in retirement they enjoyed taking day trips throughout the state with Verona's brothers. Wayne always looked forward to spending time with family. He especially enjoyed playing card games at the Behnke family farm, and more recently at Crystal River Nursing Home where Verona has resided the last few years. Wayne also loved watching the Brewers on TV. He was a devoted husband and Wayne and Verona would have celebrated their 64th wedding anniversary this year. He is survived by his loving wife, Verona; two daughters, Patricia (Daniel) Waller, Waupaca, and Susan (Willie) Bynum, Milwaukee; one son, Mark (Marcia ) Fink, Weyauwega; seven grandchildren, Lori(Dmitri) Martin, Chad (Rachel) Waller, Sara (Rafael) Connemara, Billy (Autumn) Bynum, Mallory (Sean McNulty) Fink, LanaBeth (Michael) Baerenwald, and Charles Fink; four great-grandchildren, Dhara Martin, Makenna Bynum, Elias Connemara, and expected Baby Baerenwald. He was preceded in death by his parents; his stepfather, Al Stelter; a stepbrother, Arnie Stelter; his brothers- and sisters- in-law; and a granddaughter, Haley Fink. Wayne loved his Lord and Savior and his family with all his heart He will be greatly missed. "Be faithful, even to the point of death, and I will give you the crown of life." Revelation 2:10. Visitation will take place on Tuesday, May 24, from 4:00-7:00 p.m. at the Cline-Hanson-Dahlke Funeral Home, Weyauwega. The funeral will take place at 11:00 a.m., Wednesday, May 25, 2011, at St. Peter Evangelical Lutheran Church, 312 W. Main, Weyauwega, with visitation from 10:00 a.m. until time of service.

To order memorial trees or send flowers to the family in memory of Wayne Alvin Fink, please visit our flower store.