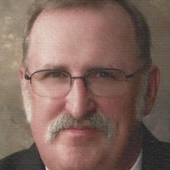 Walter "Wally" John Rasmussen Wally never wanted to waste time by sleeping in. Whether he was going to work or leaving for vacation he always wanted to be up and out the door in the early morning hours. It only came natural that Wally would leave this world and go to be with his Eternal Father at 4 a.m. Thursday morning at his home in Manawa. Wally was born on August 5th, 1958 to Neil and MaryAnn (Kuenzi) Rasmussen of Waupaca. Wally spent his childhood following his Grandpa Kuenzi around the farm and developed a true love of farming. Wally began his career at Waupaca Foundry in July of 1977 and worked until his health declined in 2012. Wally joined the Little Wolf fire department in the early 1990s and now Assistant Fire Chief Walter Rasmussen had the honor of serving the Manawa Rural Fire Department . In 1981 Wally Rasmussen and Nancy Patri were married at Zion Lutheran Church of Manawa. They were blessed with two children, Mark and Lisa. Wally had many people he held close to him. Young and old, if he liked you he would pick on you! Other things he enjoyed were working at the Waupaca Foundry, Westerns, traveling, swimming, boating, fishing, serving in the community, and making weekend trips to see his children and grandchildren. In the 4+ years that Wally battled cancer he became active in the American Cancer Society with the Relay for Life in Waupaca. Each year Wally's team would proudly display their message with that year's themed Walking for Wally' t-shirts. Wally is survived by his wife of 32 years, Nancy; his son, Mark Rasmussen (Rachel Ehlert); and daughter, Lisa Rasmussen (Jill Smothers); his parents, Neil and MaryAnn Rasmussen; sisters, Susan Pederson and Victoria (Randy) Hillskotter; granddaughter (Clara); grandsons (Avery and Tyler); Sisters-in-law Carol (Norris) Brown; Marilyn (Dale) Schwanke; Brother-in-law Dennis Patri; and many nieces, nephews, aunts, uncles and friends. He was preceded in death by his Grandpa and Grandma Walter and Susannah Kuenzi, Grandpa and Grandma Frank and Emma Buch, Father and Mother-in-law Arnold and Beatrice (Abraham) Patri, and Sister-in-law Julie Patri. The Christian Funeral for Wally will be held on Sunday, July 14, 2013 at 1:30p.m. at St. Peter Lutheran Church in Weyauwega with Rev. Newlin Schafer and Rev. Dennis Lemke officiating. Burial will be in Baldwin's Mill Cemetery. A visitation for Wally will be held on Saturday (TODAY) at the Cline-Hanson-Dahlke Funeral Home in MANAWA from 1-5 p.m. and on Sunday at the church from noon until the time of the service. In lieu of flowers, memorials are preferred for the narthex project at St. Peter's or the American Cancer Society.

To order memorial trees or send flowers to the family in memory of Walter Rasmussen, please visit our flower store.