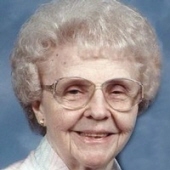 Early Sunday morning, August 3, 2014, Verona Fink, age 89, of Weyauwega, was called to a mansion specially prepared for her. She was born in the Town of Royalton on February 6, 1925, daughter of the late Henry and Ida Behnke, the youngest of six children. She was brought into God's family through Holy Baptism at St. Paul's Lutheran Church in Manawa. Verona graduated from Baldwin's Mills Elementary School. She publicly confessed her faith in the Triune God at her Confirmation at St. Paul's. Verona graduated from Manawa High School with the Class of 1942. Roni married the love of her life, Wayne Fink, on September 28, 1947, at St. Paul's Manawa. They were blessed with 63 years shared together until his death in 2011. Roni worked at the Behnke farm and then at Gehrke Bros. Hardware Store in Manawa until moving to Weyauwega with Wayne in 1947. In Weyauwega she worked at Hinz's Grocery for many years. She was then employed by the City of Weyauwega for many years, retiring as Deputy City Clerk. Wayne and Verona enjoyed taking their annual family vacation visiting her sister and family in Nokomis, Illinois. In retirement, they enjoyed day trips throughout Wisconsin with her brothers. Roni always cherished time with family. She especially enjoyed gatherings at the Behnke Family Farm, playing cards, games, laughing until she cried, and singing hymns around the piano. Later in her life, Verona resided at Crystal River Nursing Home, Waupaca. She truly enjoyed her time there playing cards and Bingo and watching the Packers and Brewers games with family. She looked forward to Wayne's daily visits with her. Thank you to the staff for their care and attention given to mom. Special thanks to the nurses and workers who mom got to personally know and love. Verona looked forward to sharing her faith in God, spreading the good news to many residents and staff at Crystal River. She is survived by her children: daughters, Patricia (Daniel) Waller, Waupaca, and Susan (Willie) Bynum, Milwaukee; one son, Mark (Marcia ) Fink, Weyauwega; seven grandchildren, Lori(Dmitri) Martin, Chad (Rachel) Waller, Sara (Rafael) Connemara, Billy (Autumn) Bynum, Mallory Fink, LanaBeth (Michael) Baerenwald, and Charles Fink; eight great-grandchildren, Dhara Martin, Elias and Cecelia Connemara, Makenna and Maddie Bynum, Logan Waller and Henry and Calvin Baerenwald. She is further survived by nieces, nephews, other relatives and friends. Besides her parents and husband, she was preceded in death by her sister Lillian Niemi, brothers Clarence, Louis, Herbie and Leonard Behnke; nephew Gary Behnke and granddaughter Haley Fink. Roni loved her Lord and Savior and her family with all her heart. She will be greatly missed. Mom taught us how to laugh and cry, and how to live and how to love. "Be faithful, even to the point of death and I will give you the Crown of life." Revelation 2:10 The Christian Funeral for Verona will be held on Wednesday, August 6, 2014, at 11:00 a.m. at St. Peter Ev. Lutheran Church in Weyauwega with Rev. Newlin Schafer and Rev. Dennis Lemke officiating. Burial will be in Oakwood Cemetery in Weyauwega. A visitation for Roni will be held on Tuesday, August 5, 2014, at the Cline-Hanson-Dahlke Funeral Home in Weyauwega from 4-7 p.m. and on Wednesday at the church from 10:00 a.m. until the time of the service.

To order memorial trees or send flowers to the family in memory of Verona V. Fink, please visit our flower store.