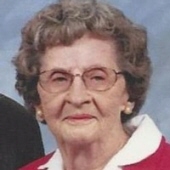 Ruth D. Schefelker Age 96, of Manawa, passed away on Friday, September 11, 2015 at the Manawa Community Living Center. She was born on October 8, 1918, in the Town of Little Wolf, daughter of the late Edward and Anna (Frank) Prill. She graduated from Little Wolf High School and attended Oshkosh Business College. On October 22, 1938 she was united in marriage to Harold Schefelker. He preceded her in death on September 16, 2010. Ruth spent most of her life doing farm work; she also had hobbies such as knitting, crocheting, bowling, and attending church functions. She was a member of St. Paul Lutheran Church in Manawa. She is survived by a son, Wayne Schefelker, Oconomowoc; daughters Pat (David)Wilson, Jean (John) Hoffman; both of Appleton; 8 grandchildren and 12 great-grandchildren; a sister-in-law Margaret (Kenneth) Fahser; brother-in-law Everett (Rita) Schefelker; also nieces, nephews, other relatives and friends. Besides her parents, she was preceded in death by a son-in-law Don Wendt, and a daughter-in-law, Jacqueline Schefelker. The funeral service for Ruth will be held on Wednesday, September 16, 2015 at 12:30 p.m. at St. Paul Lutheran Church in Manawa with Rev. Vilas Mazemke officiating. Burial will be in Little Wolf Cemetery, Town of Little Wolf. A visitation for Ruth will be held directly at the church on Wednesday from 11:00 a.m. until the time of the service. In lieu of flowers, memorials are preferred for St. Paul Lutheran Church. A special thank you to the staff at Manawa Community Living Center for their care and concern of Ruth, and also all those who visited her during her stay there.

To order memorial trees or send flowers to the family in memory of Ruth D. Schefelker, please visit our flower store.