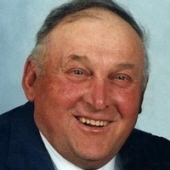 Age 84, passed away December 3, 2008 at Good Shepherd Home in Seymour. He was born July 26, 1924 in the Town of Union, Waupaca County joining brother Robert Edward Herman. He was the son of the late Edward Albert and Maryann (Huber) Herman. Ronald attended grade school in Symco for eight years guided by Rose Steinbach, Adalade Breed and Alvin Ferg. He was confirmed at St. Mark Lutheran Church in Symco by Pastor Kitzman and teachers Mrs. Henry Heidemman and Louie Janke. In 1938 Ronald entered Manawa High School arriving in a 1929 Ford Coupe. Ronald made the honor roll, football team, track team, baseball team, Senior Class Play, Junior class vice president, FFA reporter and president, all-state farmer also a first team all-conference tackle on the football team. Ronald was guided by special teachers: Mr. Swiston in football and track; Sis Kock in speech and communication and Mr. Barrington for guidance in agriculture. After finishing High School, Ronald joined his father on the farm, later recognized as a Wisconsin Century Farm. On May 12, 1951 he married Loretta Ferg. Ronald and Loretta had four daughters: Rhonda (Henry) Venzant, St. Paul, MN; Marilyn Herman, Symco; Marjorie (Dennis) Havard, Seymour and Kathryn (Tony) Hossain, Detroit, MI. Ronald was a member of St. Mark Lutheran Church in Symco where he was a past president and financial secretary on the church council. He also had been treasurer of Union Cemetery Association. He gladly served on the Citizens' Committee for the new high school in Manawa. In 1955 he won the Waupaca County Farmer of the Year award for his strong conservation efforts. In 1986 Ronald and Loretta retired from farming but continued to live on the farm, also caring for his mother, Maryann Herman and mother-in-law, Emma Ferg. Later Ronald assisted Loretta as Alzheimer's progressed in her life. Ronald shared his wisdom, patience and enjoyment of farming with nephews Jim, Gary, Rick and Steve Herman and grand children Terah (Glenn Chambers), Domonique, Vanea and Ahron Venzant, Veronica and Grant Havard. Friends and family will remember Ronald as a caring, gentle man with a love of life and God. The funeral service for Ronald will be held 11:00 a.m. Monday December 8, 2008 at St. Mark Lutheran Church in Symco with Rev. Jeffrey Smiles officiating. Burial will be in Union Cemetery in the spring. There will be a visitation at the Cline-Hanson-Dahlke Funeral Home in Manawa from 2:00 p.m until 5:00 p.m. Sunday and at the church on Monday from 10:00 a.m. until the time of the service. In lieu of flowers memorials may be directed to St. Mark Lutheran Church.

To order memorial trees or send flowers to the family in memory of Ronald Lee Herman, please visit our flower store.