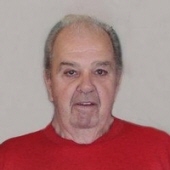 Age 81, peacefully passed away with his family surrounding him with love, on Friday, December 16, 2011 after suffering a serious stroke. Roger was born in Manawa, on December 19, 1929, son of the late Arthur Tebo and Lulu (Lamkins) Stevens. He lived in Waupaca County all his life. Roger was united in marriage to Carol Kersten on August 25, 1951. After serving in the U.S. Army, stationed in Japan, Roger worked at Farmway Co. He also worked at Driller's Service and Supply in Manawa for many years until his retirement in 1994. Roger also was a dairy farmer in Ogdensburg for about 30 years, where he provided a great life for his family. Roger could fix just about anything, and many neighbors and friends had things repaired by "Rog". The things he welded were built to last forever. His children will never need another Christmas Tree Stand! Roger also enjoyed fishing in Canada, spending time with his brother Mike, riding his Harley, "Surveying the land", from his chair in the garage, and watching packer games in Scott's garage. Roger is survived by his sons: Jeff (Ann) Stevens, Scott (Becky) Stevens of Ogdensburg; a daughter Julie (Bob) Anderson, Appleton; seven grandchildren: Fawn (Kory) Klemm, Hanna Stevens, Olivia Stevens, Amber Towery, Sarah, Steven, Michael Anderson; six great-grandchildren: Trent, Leah, Gabe, Colten, Kevin and Addie; a brother Myles J. Stevens; sisters-in-law: Nancy Hartoonian, Bev Kersten, also many nieces and nephews. He was preceded in death by his parents, Arthur Tebo and Lulu (Lamkins) Stevens, his wife Carol; sister Wilma Amundson; sisters-in-law: Betty Stevens, Dorothy Stevens; brothers-in-law: Owen Kersten and Roger Amundson. Dad you provided us a wonderful childhood and were a good example of a hard working man. You were a quiet gentle soul with a sparkling grin. Your friendship, presence and "zerberts" will be greatly missed. A Memorial service for Roger will be held on Wednesday, December 21, 2011 at 11:00 a.m. at the Cline-Hanson-Dahlke Funeral Home in Manawa with Rev. Greg Watling officiating. Burial will be in Little Wolf Cemetery, Town of Little Wolf. A visitation for Roger will be held on Wednesday at the funeral home from 9:00 a.m. until the time of the service.

To order memorial trees or send flowers to the family in memory of Roger David Stevens, please visit our flower store.