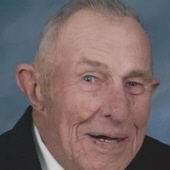 Age 91 of Manawa, Wisconsin, died on Tuesday, July 29, 2014 the Iola Living Assistance. Robert was born on September 27, 1922 the son of the late Edgar and Mary (Meyers) Bailey . On June 7, 1952, he was united in marriage to Margaret Flater at St. Paul's Lutheran Church in Manawa. She preceded him in death just one month ago on June 29, 2014. Following their marriage, Robert and Margaret moved to a farm outside of town. After residing there for two years, they moved into Manawa city limits. Robert worked at various manufacturing jobs over the years. He enjoyed hunting and fishing. He also enjoyed selling night crawlers to all the local fishermen. He was a member of St. Paul Lutheran Church in Manawa. Robert is survived by his children: son, Malcolm Bailey; daughter, Barbara Schultz; granddaughter, Brianna Schultz; brothers and sisters -in-law, Edwin (Katherine) Flater, Delores (Howard) Seefeldt and Ardella (Arthur) Pethke. He is further survived by "special grandchildren," Lucas, Lindsey, Andy, and Jessie, as well as numerous nieces, nephews, relatives and friends. Robert is preceded in death by his parents and wife; siblings: Marlyn (Sally) Bailey Sr., Howard (Ardella) Bailey, Blanche (William) Opperman and Mayford Bailey. A funeral service for Robert will be held at 11:00 a.m. on Friday, August 1, 2014, at St. Paul's Lutheran Church in Manawa, with Rev. Jeffrey Smiles officiating. Burial will be in Little Creek Cemetery in the Town of Little Wolf. A visitation for Robert will be held on Thursday (TODAY) from 4-7 p.m. at the Cline-Hanson-Dahlke Funeral Home in Manawa and on Friday at the church from 10:00 a.m. until the time of the service.

To order memorial trees or send flowers to the family in memory of Robert Earl Bailey, please visit our flower store.