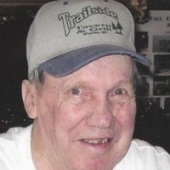 Robert C Beck, age 86, of Manawa, passed away Monday, February 2, 2015 at Appleton Medical Center. Robert was born October 31, 1928 in Manawa to George and Esther (Deckert) Beck. At an early age Robert displayed his prowess for the game of pinball, thus earning him the nickname by which he was known to most people all his life. Robert attended Little Wolf High School in Manawa where he excelled in athletics. After graduation he joined the military and served overseas. When he returned to Manawa at the end of his service, he married Jayne Mathias on June 27, 1959. Robert lived in Manawa his entire life. He worked as a Mason and had a hand in the construction of several local business establishments. Robert thoroughly enjoyed being outdoors and was an avid hunter, fisherman, and trapper, as well as a respected umpire of hundreds of baseball and softball games. He loved to play cards, shake dice, and was always ready to shake a hand and share a story. Robert is survived by his wife of 55 years, Jayne; his children; Scott Beck, Manawa: Tammy (Ron) Drath, Manawa: Dawn (Paul) Kons, Ogdensburg: Kevin (Tracy) Beck, Manawa: as well as 10 grandchildren; Tori Beck; Tony, Aubree and Aimee Drath; Adam, Ashley, Wendy and Jordon Kons; and DJ and Katlyn Beck. He is further survived by siblings: Jim (Nancy) Beck; Jack (Carol) Beck; Duncan (Bernice) Beck; Joan (Dave) Arndt; Paul (Janet) Beck; and Judy (Jim) Yeager; as well as many nieces and nephews. He was preceded in death by his parents, and brothers Richard, Ronald, and William. The funeral service for Robert will be held on Friday, February 6, 2015 at 11:30 a.m. at St. Paul Lutheran Church in Manawa with Rev. Vilas Mazemke officiating. Burial will be in Little Wolf Cemetery, Town of Little Wolf. A visitation for Robert will be held at the Cline-Hanson-Dahlke Funeral Home in Manawa on Thursday from 4-7 p.m., and on Friday at the church from 10:30 a.m. until the time of the service.

To order memorial trees or send flowers to the family in memory of Robert C. 'Pinball' Beck, please visit our flower store.