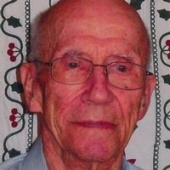 Oral H. Schuelke, age 99, New London formerly of the Manawa area went to his heavenly home on Sunday, September 7, 2014, at St. Joseph Residence. He was born on August 14, 1915, in Symco son of the late Henry and Hulda (Traugath) Schuelke. He proudly served his country with the US Army. On April 14, 1939, Oral was united in marriage to Margaret Meyers. She preceded him in death in 1999. He was employed at Harley Davidson in Milwaukee for 34 years; retiring in 1976. He was a member of St. Mark Lutheran Church, Symco and also a member of the VFW. Oral is survived by his children: Terry (Brian) Kesler, Hortonville and Gary (Bernice) Schuelke, Antigo; grandchildren: Shannon Dahms, Marti (David) Eldridge, Connor Kesler, and Matthew Kesler. He is further survived by many great-grandchildren, nieces, nephews, other relatives and friends. His was preceded in death by his parents, wife, son Ronald, 1 sister and 4 brothers. Funeral services for Oral will be held on Wednesday, September 10, 2014, at 11:00 a.m. at St. Mark Lutheran Church, Symco with Rev. Jeffrey Smiles officiating. Visitation will be held at the church on Wednesday from 10:00 a.m. until the time of service. Burial will be in the Little Creek Cemetery, Town of Little Wolf.

To order memorial trees or send flowers to the family in memory of Oral H. Schuelke, please visit our flower store.