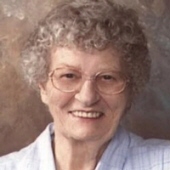 Age 78, of Weyauwega, died on Wednesday, April 18, 2012, at Kindred Hearts in Clintonville. She was born on May 25, 1933, in Calumet, Iowa daughter of the late William and Theresa (Erickson) Mesner. On February 26, 1950, she married Bruene Hattermann in Paullina, Iowa. He preceded her in death in 2006. Marlene and Bruene farmed in Paullina, Iowa and also when they moved to Weyauwega in 1958. They retired from farming in 1975. She was a member of St. Peter Ev. Lutheran Church in Weyauwega. She is survived by her 4 children: Bruene Lynn Hattermann, Bear Creek; Dean Alan (Julie) Hattermann, New London; Anita Jane (Mike) Tillman, Tennessee; David Lee Hattermann, Arkansas; 13 grandchildren, many great-grandchildren; sisters-in-law: Hazel Meyer, Iowa; Hilda (Eldor) Pauling, Arkansas. She is further survived by nieces, nephews, other relatives and friends. She was preceded in death by her parents, husband, and two brothers Gerald and Marvin. The Christian Funeral for Marlene will be held on Saturday, April 21, 2012, at 10:30 a.m. at St. Peter Ev. Lutheran Church in Weyauwega with Rev. Dennis Lemke and Rev. Robbin Robbert officiating. Burial will be in Prairie View Cemetery in Paullina, Iowa. A visitation for Marlene will be held directly at the church on Saturday from 9:30 a.m. until the time of the service.

To order memorial trees or send flowers to the family in memory of Marlene Ann Hattermann, please visit our flower store.