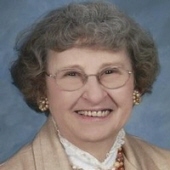 Margaret M. Bailey, age 83 of Manawa, Wisconsin, died Sunday evening, June 29, 2014, at Riverside Medical Center in Waupaca following a brief illness. Margaret was born in the Town of Little Wolf on July 30, 1930, the daughter of the William and Alice (Polley) Flater. On June 7, 1952, she married Robert Bailey at St. Paul's Lutheran Church in Manawa. Following their marriage, Margaret and Robert moved to a farm outside of town. After residing there for two years, they moved into Manawa city limits. Margaret worked at various places throughout town before becoming a cook at her nephew's "local establishment." Margaret was a member at St. Paul's Lutheran Church in Manawa where she was very involved in the Ladies Aid Society. She enjoyed gardening, cooking, baking, and most of all, spending time with her granddaughter, nieces and nephews, and other family. Margaret is survived by her husband, Robert; son, Malcolm Bailey; daughter, Barbara Schultz; granddaughter, Brianna Schultz; brother, Edwin (Katherine) Flater; and sisters, Delores (Howard) Seefeldt and Ardella (Arthur) Pethke. She is further survived by "special grandchildren," Lucas, Lindsey, Andy, and Jessie, as well as numerous nieces, nephews, relatives and friends. Margaret is preceded in death by her parents; her 2nd husband, Albert Nemmetz and father and mother in-law, Ed and Mary Bailey. A funeral service for Margaret will be held at 11:00 a.m. on Thursday, July 3, 2014, at St. Paul's Lutheran Church in Manawa, with Rev. Vilas Mazemke officiating. Family and friends may gather directly at church Thursday morning from 9:30 a.m. until the time of service. Burial will be in Little Creek Cemetery, Town of Little Wolf.

To order memorial trees or send flowers to the family in memory of Margaret M. Bailey, please visit our flower store.