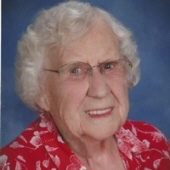 Margaret Ann Phillips, age 99, of Berlin, formerly of Weyauwega, went to her heavenly home on Sunday, November 11, 2018. She was born on July 20, 1919 daughter of the late Arnold and Lena Van Handel. On July 27, 1937 she was united in marriage to Sylvester “Bud” Phillips in Little Chute. He preceded her in death on April 16, 1981. Margaret loved to read, embroider, sew, bake and cook meals for family gatherings. Her family was the most important thing to her. She was a member of Ss. Peter & Paul Catholic Church in Weyauwega Survivors include her children: Joan (Robert) Hendee, John (Sherry) Phillips, Joe (Marlene) Phillips, Jim (Sandy) Phillips, Jerry (Mary) Phillips, Janice Risch, Jean (Jim) Murray, Jill Rutherford, Julie Phillips (special friend John Hauser) and Jeffrey (Beth) Phillips; 25 grandchildren; 2 step-grandchildren, 34 great-grandchildren; 9 great-great-grandchildren and 2 sisters-in-law, Patricia Grall and Ramona (Rodney) Coughlin. Besides her parents and husband, she was preceded in death by an infant son; siblings and a step-grandchild. The Funeral Mass for Margaret will be held on Friday, November 16, 2018 at 11:00 a.m. at Ss. Peter & Paul Catholic Church (608 E. Main St.) in Weyauwega. Burial will be in Oakwood Cemetery, Weyauwega. A visitation for Margaret will be held at the church on Friday from 9:00 a.m. until 10:45 a.m. In lieu of flowers memorials can be made to Ss. Peter and Paul Catholic Church.