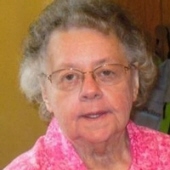 Leila May Lipke (Kolosso), age 80, of West Allis, was born into eternal life on Tuesday, February 9th, 2016 at her residence.
Leila was born on May 21st, 1935 in the Town of Little Wolf, Waupaca County, daughter of the late Lawrence and Martha (Krueger) Kolosso. On February 23rd, 1957, she was united in marriage with Irven Lipke in Manawa, a marriage lasting 55 years until the time of his death. Leila was a homemaker and mother as she and her husband raised their six children.
Leila is survived by five children: Robert, Michael (Tammy), Gerald (Jayne), Laura (Thomas)Hultman, and Cindy Lipke; grandchildren: Kevin, Jacob, Krista, Haley, Ryan, and Angela; sister: Gladys Petersen; sisters-in-law: Lucille Lipke, Leola (Daniel) Jenks, and Judy Kolosso. She is further survived by nieces, nephews, other relatives, and friends.
She was preceded in death by her parents; husband Irven, eldest son David, two brothers, Lawrence Kolosso and Lee Kolosso, brother-in-law Irving Petersen and brother-in-law Clarence Lipke.
The funeral service for Leila will be held on Friday, February 12th, 2016 at 2:00pm at Cline-Hanson-Dahlke Funeral Home in Manawa with Rev. Vilas Mazemke officiating. Burial will be in Lind Center Cemetery in the town of Lind. A visitation for Leila will be held at the funeral home on Friday from 1:00pm until the time of the service.

To order memorial trees or send flowers to the family in memory of Leila Lipke, please visit our flower store.