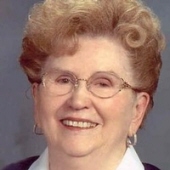 Age 86, of Clintonville, formerly of Symco, passed away on Tuesday, December 13, 2011 at New London Family Medical Center surrounded by her family. She was born on April 17, 1925 in Appleton, daughter of the late Raymond Sr. and Anna (Weckwerth) Ulman. LaRaine was married to Leonard Jaeger on April 7, 1945, he preceded her in death on February 5, 1980. LaRaine and Len farmed from the time of their marriage until 1976 when Dave and Carla Strehlow took over the farm. She then married Ray Schmitter on May 23, 1981 and he preceded her in death on December 10, 1999. LaRaine was employed as a legal secretary first with Benton & Moser in Appleton and then with Gerald Anderson of Manawa, and finally with Lathrop & Sorenson in Hortonville for the past 40 years retiring at the age of 78. She moved to Angeleus Retirement Center in Clintonville two years ago. In the past, LaRaine enjoyed traveling, playing cards, and sewing for herself and her family. She was a member of St. Mark Lutheran Church in Symco. She is survived by two daughters: Sharon Stein and special friend Dave Zeeman; Carla Strehlow; granddaughter: Aimee (Greg) Mashlan; great-grandchildren: Makayla and Brady; step-children: Carrie (Dan) Urban, Randa (Bill) Greshamer, Craig (Carolyn Byl) Schmitter, Joel Schmitter, Kelly Melcher and special friend Scott Hagen, Jamie (Mike) Phillips; step-grandchildren and step great-grandchildren: Nicole (Rob) Weber, Mackenzie and Logan, Justin, Jenni Slater and daughter Isle, Patrick and Michaela Phillips, Carley and Dustin Krueger, Rebecca Brown and her fiancé Gerrod King, Rylie and Reese Kakwitch, Danny Jo Brown; nephews: Mark (Beth) Ulman and their children Travis, Trevor, Marissa and Brett; Mitch (Kit) Ulman; a step sister-in-law Ann Korb of Ohio. Besides her parents and husbands, she was preceded in death by a brother Ray Ulman Jr. and his wife Bonnie, sons-in-law Donald J. Stein and David A. Strehlow; sister-in-law Esther Jaeger; and a step brother-in-law Merl Korb. The funeral service for LaRaine will be held on Friday, December 16, 2011 at 11:00 a.m. at St. Mark Lutheran Church in Symco with Pastor Jeffrey Smiles officiating. Burial will be in Union Cemetery in Symco. Friends may call directly at the church on Friday from 9:30 a.m. until the time of the service. The family would like to thank Pastor Jeffrey Smiles, the nurses at New London Family Medical Center and Theda Care Hospice for their care and concern of LaRaine.

To order memorial trees or send flowers to the family in memory of LaRaine L. Schmitter, please visit our flower store.