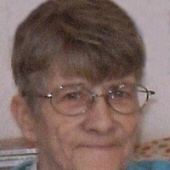 Age 61, of Weyauwega, passed away on Friday, May 3, 2013. She was born on June 12, 1951 in Fond du Lac, daughter of the late Donald and Lorraine (Smith) Landerman. Joan graduated from Goodrich High School in Fond du Lac. She was a bartender for many years. Joan loved working with crossword puzzles, was an avid baker and cook, and enjoyed watching the Lifetime Channel and Ellen Degeneres on tv. She is survived by her children: Willie (Heather Salzer) Barnes, Oshkosh; Raine Miller, Oshkosh and Dee (Troy Blank) Miller, Oshkosh; 6 grandchildren: Teesa, Kyle, Colin, Bryce, Amber and Adam; a sister: Bev (Ed) Bruesch, Waupun. She is further suvived by a nephew Lee Bruesch, other relatives and friends and a special friend Ray. She was preceded in death by her parents, a brother Donald "Chewy" Landerman, the father of her children Rodney Miller, and her step-mother Dorothy. The funeral service for Joan will be held on Tuesday, May 7, 2013 at 11:00 a.m. at the Cline-Hanson-Dahlke Funeral Home in Weyauwega with Chaplain Jim Frank of Theda Care at Home Hospice officiating. Burial will be in Oaklawn Cemetery in the Town of Black Wolf. A visitation for Joan will be held directly at the funeral home on Tuesday from 9:00 a.m. until the time of the service. The family would like to thank Theda Care Hospice for their care and concern of Joan.

To order memorial trees or send flowers to the family in memory of Joan M. Williams, please visit our flower store.