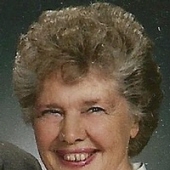 Our special angel, Jean Bertha Anderson, age 86, was called home to the Lord on Sunday, February 9th, after a lengthy battle with cancer. Jean was born in Bellingham, Washington, on January 18, 1928, to the late Reinhold and Mildred Blumke. Jean married her true love Roy W. Anderson on June 22, 1945, when he was home on leave from the Navy during WWII. They moved from Clintonville to Weyauwega in 1950. She worked at Lakeview Manor as a nurse's aide for 14 years. Jean was also a 24 year member and 3 time President of the American Legion Auxiliary No. 176, and a life member of the VFW Ladies' Auxiliary 10407. She was a member of the St. Peter's Lutheran Church in Weyauwega since 1950, and served on their Ladies' Aid program for 36 years. Jean has six grandchildren and 3 great grandchildren. She had such a kind, gentle and giving soul and spirit. She was a very special and loving Mother to her own family, and also took care of 41 foster babies and children throughout the years, many staying with them for long periods. She also held down the fort at home with all the kids while Roy was away serving in the National Guard for a year at Fort Lewis, Washington, during the Cuban Missile Crisis in 1961. Roy and Jean enjoyed going to their cabin near Phillips, camping and fishing around Wisconsin and Canada with many special friends, and one highlight she had was catching a nice Northern by just a hook through the tail, true story. She was also a huge Packer Backer and watched every game. She loved her various dogs and cats through the years and they all gravitated to her special aura. Every wild critter in the neighborhood knew where to eat, as she loved to feed and watch her birds and squirrels, and even her favorite chipmunk with the short tail had special privileges. Jean had special times with both sets of grandparents who played a very important role in her life, Joseph and Winnifred Bodoh, and Albert and Bertha Blumke. Jean, Roy and the family spent many happy hours visiting her father, Reinhold, and special sister Lucille Smith and her family in Rochester, MN. Her brother Ronnie Blumke and his family were also part of her busy life. Jean is survived by her loving husband and companion, Roy. They would have celebrated 69 years of marriage this coming June. She is also survived by their dog Sassy, and cat Patches, at home. Survived by daughter Sandy (Jim) Merchant, Theresa, WI, granddaughter Jennifer (Ben) Sheets, step-grandson Issac, and their recently born great granddaughter Iva Grace, in Ohio, and extended family Scott, Cheryl, Eric and Susie and their families. Her grandson Jason died in 1995. Survived by daughter Diane Anderson,Amherst, WI, grandson Jesse (Becky) Landre, great granddaughter Allison Landre in Iola, WI, and granddaughter Lacy Landre, Pewaukee, WI, and extended family Dan, Mary, John, Nancy and Tom Landre and their families. Survived by the mother of Garald's daughters, Denise Anderson, Weyauwega, granddaughter Kimberly (Brian) Roach and great grandson Garrison, Stevens Point, WI; and granddaughter Kristen Anderson, Manawa, WI, and her special friend and children. Survived by brother-in-law Bob and Mary Mathews and their children, nieces Marie, Margie and Michelle and families. Survived by nieces and nephews Susie (Jim), Wayne, Carolee (Terry), Daryl (Mindy) and all their families from the Rochester, MN, area; and the families of her brother Ronnie. Survived by nieces and nephews Don (Sharon), Jerry, Tommy, Roger (Pam), and Chris (Greg). Survived by special foster children Richard (Fran) Engle, David (Pam) Engle and Carol (Steve) Buck and all their families. Jean is preceded in death by her son Garald Roy on September 4, 2013, her grandson Jason Roy Merchant on June 16, 1995, her sister Lucille and brother Ronnie and her parents and grandparents. Jean also wishes to acknowledge a very special close friend, Ardys Faulks, who always told her to "keep in touch." Jean was well loved and had so many wonderful friends and neighbors, and special thanks to Butch and Carol Ponto for watching out for her and Roy through the years when the family couldn't always be there. A memorial service for Jean will be held on Saturday February 15, 2014 at 11AM at St. Peter Ev. Lutheran Church in Weyauwega with Rev. Newlin Schafer officiating. A memorial gathering of family and friends will take place directly at the church on Saturday from 9AM until the time of the service. It was Jean's wish that memorials be given to the St. Peter Ev. Lutheran Church narthex building fund and to the Waupaca animal rescue help shelter and Waupaca County Humane Society.

To order memorial trees or send flowers to the family in memory of Jean B. Anderson, please visit our flower store.