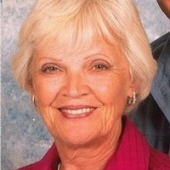 Age 69, of Manawa, passed away on Tuesday, February 11, 2014 at her residence. She was born on July 4, 1944 in the Town of Split Rock, Waupaca County, daughter of the late Raymond and Florence (Salzman) Redman. On November 19, 1960, she was united in marriage to Ronald Haines at St. Anthony Catholic Church in Tigerton. In Jan's early years, she was a devoted wife and homemaker and later worked in various factories. Jan later did in home care and also did commercial and residential cleaning. Her interests included golf, tennis, hunting, fishing and her favorite, gardening. She also loved music and dancing. She will be remembered for her meekness and kindness, her love for family and loyalty to her husband of 53 years, Ron. She was a member of Sacred Heart Catholic Church in Manawa. She is survived by her husband Ron; daughters: Rhonda (James) Grajewski, Sheldon; Brenda Arndt, Manawa; Sandra (Timothy) Lund, Lakeville, MN; son: Christopher (Karen) Haines, Manawa; 16 grandchildren and 7 great-grandchildren; brothers: Roger (Barb) Redman, Raymond (Beverly) Redman, David Redman; sisters: Beverly (John) Meverden, Kathleen (Mike) Thiel, Ann (Warren) Griepentrog. She is further survived by nieces, nephews, other relatives and friends. She was preceded in death by her parents, grandson Matthew Grajewski, brother-in-law Aelrod "Al" Meverden, and a nephew Joshua Griepentrog. The funeral service for Jan will be held on Friday, February 14, 2014 at 11:30 a.m. at the Cline-Hanson-Dahlke Funeral Home in Manawa with Fr. Amal Roche officiating. A visitation for Jan will be held at the funeral home on Thursday, February 13, 2014 from 4-6 p.m. and on Friday from 10:30 a.m. until the time of the service.

To order memorial trees or send flowers to the family in memory of Janice Patricia Haines, please visit our flower store.