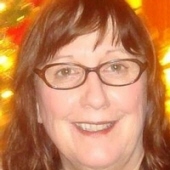 loving wife, mother and grandmother, passed away suddenly at her home in Weyauwega on Saturday, April 30, 2011. Jane was born April 7, 1949, the daughter of Celestine (Sally) Essler and James Mildenberger. She grew up in Minneapolis and graduated from Regina High School. She attended classes at the University of Minnesota in Minneapolis and at the University of Wisconsin Stevens Point. She began her career as an insurance auditor in Minneapolis with Reliance Insurance Co. Jane met her beloved husband, Ray, on a call to Hutchinson Insurance in 1979. She and Ray were married on October 25, 1980. Jane was very involved with her church and community. She was a member, former Elder and choir member at First Presbyterian Church, Weyauwega. Jane served on the Weyauwega Fremont School Board, was a volunteer with the Meals on Wheels program, a member of the Kensington Bridge Club and joined her husband, Ray, in his many community activities. Jane and Ray loved spending time together in Tucson, Arizona where she especially enjoyed the sunsets in the desert. She owned her own yarn shop in Appleton for several years and in recent years worked at the Feminine Touch in Waupaca. Her granddaughter, Riley, was the light of her life. They spent many hours together reading and playing. Jane loved her friends and enjoyed their company whatever the activity. Jane is survived by her husband Ray, her sons Ryan (Erica Bolles) and Ross, Ryan's daughter Riley, sister Judy (Charles) Bird of Rochester, MN, their children Danielle, Charlie, and Mark, and brother Joe Mildenberger (Rebecca Reinemann) of Plymouth, MN, and their children Matt and Andy, her mother Sally, and sister- in-law, Ann (Steve) Van Ess and their son Brett. Jane was preceded in death by her father James and niece Julia Bird. Jane was a friend to all. She was kind, loving and generous. She will be missed beyond words. The funeral service for Jane will be held on Tuesday, May 3, 2011, at 11 a.m. at the First Presbyterian Church in Weyauwega (200 S. Pine St.) with the Rev. Sherwood C. McKay, Jr. officiating. Friends may call at the Cline-Hanson-Dahlke Funeral Home in Weyauwega, on Monday from 4 to 8 p.m. and on Tuesday at the church from 9:30 a.m. until the time of the service.

To order memorial trees or send flowers to the family in memory of Jane M. Hutchinson, please visit our flower store.