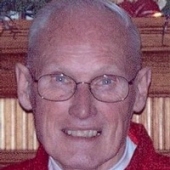 Age 83, of Manawa, went to his Heavenly Home on Wednesday, December 22, 2010, at the Manawa Community Nursing Center. He was born on March 25, 1927, in the Town of Little Wolf, son of the late Albert and Martha (Roesler) Drath. On August 23, 1952, he was united in marriage to Anita Krenke. Together, they celebrated 58 years of marriage. Howard owned and operated Drath Sewing Center for over 50 years, during which time he and Anita took several trips to Sweden for the business. Howard had many passions. He loved to attend all of his sons, and grandchildren's sporting events. He was a huge fan of the Packers and Brewers. Howard was an avid outdoorsman, enjoying hunting and fishing, which included going to their cabin up north. He was a member of St. Paul Lutheran Church in Manawa. . He is survived by his wife Anita; 4 sons: Ron (Tammy), Tim (Gail), Steve (Sandra), Jeff (Pam); loving grandfather to Ian (Jamie) Brace, Tristan (Jessie) Drath, Andy, Tony and Dustin Drath, Desiree Brace, Jessie (Joel) Bonikowske, Caitlin Kjendalen, Tarra, Aubree and Aimee Drath; two great-grandchildren: Jack Brace and Wyatt Drath. Howard is further survived by his in-laws, Irene (Leroy) Ruppel, Melvin (Diane) Krenke, Sue Krenke, Erdine (George) Jones, Lucille Drath and many nieces and nephews. Besides his parents, he was preceded in death by a brother, Ordell and a brother-in-law, Alvin Krenke. The funeral service for Howard will be held on Monday, December 27, 2010, at 11:00 a.m. at St. Paul Lutheran Church in Manawa with Rev. Vilas Mazemke officiating. Burial will be in Little Creek Cemetery in the Town of Little Wolf. Friends may call at the Cline-Hanson-Dahlke Funeral Home in Manawa on Sunday, December 26, 2010 from 2-5 p.m. and on Monday at the church from 10:00 a.m. until the time of the service. In lieu of flowers, a memorial fund has been established. Dad, we are so lucky to have had you in our lives. Our memories and the love we have for you will stay in our hearts forever. We will truly miss all of your hunting and fishing stories. We are sure that you are talking Vince Lombardi's ear off already!! God bless you dad and "thank you" for being you! Love, Your Family.

To order memorial trees or send flowers to the family in memory of Howard Victor Drath, please visit our flower store.