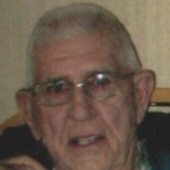 Age 90, of Manawa, passed away on Sunday, May 26, 2013. He was born on July 23, 1922 in New London, son of the late Elwood and Alvina (Platte) Hutchison. On November 15, 1941, he was united in marriage to Ilas Leach in New London. She preceded him in death on July 18, 1981. He served his country in the U.S. Army during World War II. Gordon worked for Sturms in Manawa as a truck driver for over 40 years. He was also a part-time Police Officer in Manawa and a Waupaca County Deputy Sherriff from 1950-1990. He was a Conservation Warden for Waupaca County for many years until August 27, 1991. Gordon was a member of Zion Lutheran Church in Manawa. He is survived by his children: Beverly (Leonard) Thontlin, New London; Melvin (Sherlene) Hutchison, Manawa; grandchildren: Brenda Mitze, Daniel (Holly) Thontlin, Tanya Berry, Julia (Bob) Fields, Paul Hutchison, Tom (Carrie) Hutchison; great-grandchildren: Jesse, Jaclyn, Joe, George, Tyler, Hunter, and Gunner; one great-great-grandchild Kyle; three sisters: Jeanette Plowman, Dallas, TX; Joyce Popke, New London; Maryette (Richard) Fischer, Wild Rose; sister-in-law Grace Kloehn, New London. He is further survived by nieces, nephews, other relatives and friends. Besides his parents and wife, he was preceded in death by a brother Clifford Hutchison, half-brother Martin Mikulski, and a special friend Ila Howe and his canine companion Honey B. The funeral service for Gordon will be held on Wednesday, May 29, 2013 at 11:00 a.m. at Zion Lutheran Church in Manawa with Rev. Thomas Theama officiating. Burial will be in Little Wolf Cemetery in the Town of Little Wolf. A visitation for Gordon will be held directly at the church on Wednesday from 10:00 a.m. until the time of the service. Gordon Melvin Hutchison

To order memorial trees or send flowers to the family in memory of Gordon Melvin Hutchison, please visit our flower store.