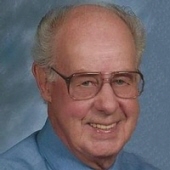 George Alvin Nelson, age 89, of Manawa, passed away on Sunday, September 10, 2017 at Bethany Home in Waupaca. George was born on July 25, 1928 in Scandinavia to the late Isaac and Mathilda (Brandt) Nelson. He was united in marriage to Dorothy Peterson on August 14, 1946. She preceded him in death on July 15, 2017. George worked for 22 years at Edison/Simmons in New London and then at Curwood in New London for 23 years. George loved hunting, fishing, Brewers, Green Bay Packers and camping in Fremont. He was a member of Zion Lutheran Church in Manawa.

The funeral for George will be held at 11:00 a.m. on Wednesday, September 13, 2017 at Zion Lutheran Church in Manawa. Rev. Walter Steinbach will be officiating. Visitation will be held at the church from 9:30 a.m. until the time of the service. Burial will be in Little Wolf Cemetery in the Town of Little Wolf.

The family wishes to thank Bethany Home for their wonderful care and concern of George.

To order memorial trees or send flowers to the family in memory of George Alvin Nelson, please visit our flower store.