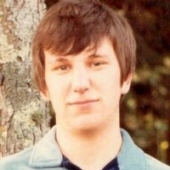 Age 46, of Milwaukee, formerly of Ogdensburg, passed away on Tuesday, October 25, 2011, at Lifecare Hospitals of Wisconsin in Pewaukee, after a lingering battle with MS. He was born on August 16, 1965 in New London, son of Leo and Rose Janke. Gary was baptized and confirmed at St. Mark's Lutheran Church in Symco. He graduated from Little Wolf High School in Manawa in 1984. Besides his parents, he is survived by his siblings: Karen (Joe) Holman, Plover; Terri (Jeff Kent), Iola; Tammy Dunkel, Appleton; Ben Janke and friend Sue Fisher, Ogdensburg; his caregivers of over 20 years: Maxine Hunt and Clarine Hunt of Milwaukee; nieces, nephews, aunts, uncles and cousins. He was preceded in death by his grandparents, uncles, and aunts. A memorial service for Gary will be held on Tuesday, November 1, 2011, at 11:00 a.m. at the Cline-Hanson-Dahlke Funeral Home in Manawa with Rev. Jeffrey Smiles and Rev. Larry Hauser officiating. Burial will be in Baldwin's Mill Cemetery, Town of Royalton. Friends may call directly at the funeral home on Tuesday from 10:00 a.m. until the time of the service. In lieu of flowers, a memorial fund has been established.

To order memorial trees or send flowers to the family in memory of Gary Daniel Janke, please visit our flower store.