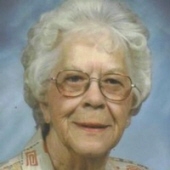 Age 86, of Weyauwega, passed away on Tuesday, September 2, 2008, at her daughter, Dawn's residence. She was born on June 18, 1922 in Amherst, daughter of the late Otto and Hulda (Schuelke) Kaminske. On September 25, 1941, she married Harold Wilson. He preceded her in death in 1966. On June 17, 1967, she married Anton "Tony" Resch. Frieda attended Waupaca High School. She lived briefly in Milwaukee, returning to Weyauwega in 1950. She was an owner/operator with her husband Tony, of the Midway Bar and Resch Sand & Gravel. They moved to Alaska in 1975, working for the State of Alaska in Local 71. They moved back to Weyauwega in 1986. She was a member of St. Peter Lutheran Church in Weyauwega and their Ladies Aid. She was also a member of the American Legion Auxiliary. She was active at the St. Vincent DePaul store and enjoyed gardening, fishing, traveling and was an avid Brewer fan. Survivors include her husband Tony of 41 years; children: Dennis (Beverly) Wilson, Dan (Faye) Wilson, Dawn (Jim) Hofferber, all of Weyauwega; Cathy Ley, Yelm, WA; Sandy (Skip) Bassett, Wausau; Jack Resch, Mpls., MN; William (Susan) Resch, Weyauwega; Janet (Tom) Tess, Fond du Lac; Jean (Randy) Mann, Fairbanks, AK; 26 grandchildren and 32 great-grandchildren; a brother: Herb (Audrey) Kaminske, Weyauwega; a sister: Edna Hansen, Weyauwega. She is further survived by a special son-in-law Norman (Mary) Sellin, also nieces, nephews, other relatives and friends. Besides her parents and first husband, she was preceded in death by a daughter Dianna Sellin, brothers Albert, Arnold, Carl and Emil Kaminske, and a son-in-law Bob Ley. The Christian Funeral for Frieda will be held on Friday, September 5, 2008 at 11:00 a.m. at St. Peter Lutheran Church in Weyauwega with Pastor Robbin Robbert and Pastor Dennis Lemke officiating. Burial will be in the Oakwood Cemetery in Weyauwega. Friends may call directly at the church on Friday from 9:00 a.m. until the time of the service.

To order memorial trees or send flowers to the family in memory of Frieda B. Resch, please visit our flower store.