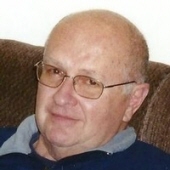 Age 70, of Weyauwega, passed away on Saturday, November 19, 2011 with his family by his side at Theda Clark Medical Center in Neenah. He was born on June 24, 1941 in Neenah, son of the late Fred and Nellie (Pope) Maass. Fred graduated from Weyauwega High School with the Class of 1959. He proudly served his country with the U.S. Army. On February 6, 1965, he was united in marriage to Elaine Mielke at St. John's Catholic Church in Menasha. Fred worked for his father at the Weyauwega Dairy Bar and also worked at Miller Electric in Appleton for 25 years. Following his retirement he worked for the Wisconsin Veteran's Home in King. He was one of the first members of the Jaycees in Weyauwega. He served as a volunteer fireman and also helped at Harrigan Funeral Home. Fred was a member of the American legion Post. He enjoyed traveling, especially his trip to Paris this past April. He collected dog figurines and loved sports, especially the Dallas Cowboys and the New York Yankees, but what he loved most was his time spent with his children and grandchildren. Survivors include his wife Elaine; children: Tim (Brenda) Maass, Mark (Amy) Maass, Sheri (Brent) Reichert; grandchildren: Courtney, Kayle, John, Marissa, Andrew and Evan. He is further survived by a sister Fay Blount, aunts, uncles, cousins, nieces, nephews, and many friends. He was preceded in death by his parents, a son Daniel John Maass, and his mother and father in-law Leo and Clara Mielke. The funeral service for Fred will be held on Tuesday, November 22, 2011 at 11:00 a.m. at the Cline-Hanson-Dahlke Funeral Home in Weyauwega with Rev. Greg Watling officiating. Burial will be in Oakwood Cemetery in Weyauwega. The visitation for Fred will be held on Tuesday at the funeral home from 9:00 a.m. until the time of the service.

To order memorial trees or send flowers to the family in memory of Fred H. Maass, please visit our flower store.