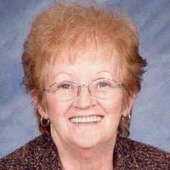 Eunice (Kostrzak) Ferg, age 76, of Manawa, passed away peacefully in her home on Friday, September 2, 2011. Eunie was born on December 19, 1934 in Manawa, daughter of the late John J. and Elsie J. (Balsey) Kostrzak. On October 4, 1952, she married Wesley Ferg in Manawa. He preceded her in death in 1998. She graduated from Little Wolf High School, and was a member of St. Paul Lutheran Church in Manawa. She enjoyed a good book and watching SyFy movies, loved a flashy purse and always had a soft spot in her heart for animals. Most of all she enjoyed time spent talking with her family and friends. She is survived by her children: James W. (Cindy) Ferg, Ogdensburg; Nancy A. Ferg and special friend Ken, Hortonville; John A. Ferg, Ogdensburg; Jay S. (Vickie) Ferg, Ogdensburg; Wendy S. (Paul) Nichols, New London; 10 grandchildren: Jim, Carie, Dana, Tony, Jana, Jacob, Elizabeth, Gabby, Wyatt and Josie; 6 great-grandchildren: Autumn, Skye, Alex, Bella, Lexi and Gavyn; 2 sisters: Donna Stutleen, Green Bay; Elaine (Smiley) Miller, Clintonville. She is further survived by nieces, nephews, other relatives and friends. She was preceded in death by her parents and husband, her eldest daughter Connie L. (Ferg) Seeger, two brothers Donald G. and Ronald L. Kostrzak. The funeral service for Eunie will be held on Wednesday, September 7, 2011 at 1:30 p.m. at St. Paul Lutheran Church in Manawa with Rev. Vilas Mazemke officiating. Burial will be in Little Wolf Cemetery in the Town of Little Wolf. Friends may call at the Cline-Hanson-Dahlke Funeral Home in Manawa on Tuesday from 4-7 p.m. and on Wednesday at the church from 12:30 p.m. until the time of the service.

To order memorial trees or send flowers to the family in memory of Eunice I. Ferg, please visit our flower store.