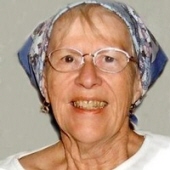 Age 73, of Weyauwega, passed away on Sunday, April 26, 2009 at her residence. She was born on October 29, 1935 in Holly, Michigan, daughter of the late Lon and Marion (Brady) Harris. She married Kenneth Smith in New London in June of 1996. Elizabeth lived in Michigan until moving to Wisconsin in 1978. She worked at a local newspaper in Michigan and also an attorney's office, while in Wisconsin she worked at Kaukauna Cheese. She loved wild flowers, gardening, quilting and her cats. She also enjoyed going for rides with her husband and playing cards with her children. She is survived by her husband Kenneth, Weyauwega; her children: Lisa (Andy) Freitag, Green Bay; Ronald (Mary) LaBonte, Longmont, CO.; David (Cynthia) LaBonte, Rapid River, MI.; Leslie LaBonte, Green Bay; Linda (Martin) St. George, Sebastopol, CA.; Lee Thomas, Green Bay; Glenn Smith, Houston, TX.; fourteen grandchildren and four great-grandchildren. She is further survived by a step-brother and a step sister. She was preceded in death by her parents, step father William Courter, and a grandson Joshua. The funeral service for Elizabeth will be held on Thursday, April 30, 2009 at 11:00 a.m. at the First Presbyterian Church (200 S. Pine St.) in Weyauwega with Rev. Joe Ripley officiating. Burial will be in Northport Ostrander Cemetery. Friends may call directly at the church on Thursday from 9:30 a.m. until the time of the service.

To order memorial trees or send flowers to the family in memory of Elizabeth A. Smith, please visit our flower store.