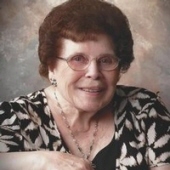 Elaine A. Anthony, age 95, of Weyauwega, went to her heavenly home on Thursday, October 19, 2017, surrounded by her loving family, at Crossroads in Weyauwega. She was born on June 13, 1922 in Weyauwega, daughter of the late Max and Alma (Niemuth) Pirk. She attended school in the Weyauwega area and graduated from Weyauwega High School in 1940. On October 5, 1946, she was united in marriage to Ormal Anthony. He preceded her in death on June 28, 1982. Elaine lived in the Weyauwega area most of her life. She worked as a grocery store clerk in Weyauwega for many years, first at Hintz Shur Fine Foods and then Ron & Lloyd's Red Owl until she retired. She bowled for many years on the Monday night Ladies League at Radtke's Lanes in Weyauwega. She was a member of St. Peter Ev. Lutheran Church in Weyauwega and their Ladies Aid.

The Christian Funeral for Elaine will be held on Monday, October 23, 2017 at 11:30 a.m. at St. Peter Ev. Lutheran Church in Weyauwega with Rev. Dennis Lemke officiating. Burial will be in Oakwood Cemetery, Weyauwega. A visitation for Elaine will be held at the church on Monday from 9:30 a.m. until the time of the service. Memorials should be made to St. Peter Ev. Lutheran Church.

A special thank you to the caring staffs at Park Vista in Waupaca and Crossroads Care Center in Weyauwega for their wonderful care and concern of Elaine.

To order memorial trees or send flowers to the family in memory of Elaine A. Anthony, please visit our flower store.