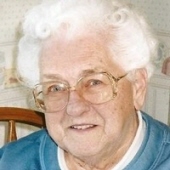 Age 86, of Weyauwega, passed away on Tuesday, February 14, 2012 at the Wisconsin Veteran's Home in King after a battle with pancreatic cancer. She was born on April 20, 1925 in Duluth, Minnesota, daughter of the late Frank and Lily (Janzig) Partika. At age 5, mom, along with her brothers Irving and Dick, were taken in by the loving nuns at St. James Orphans Home in Duluth, MN. The seeds were planted at a young age for her love of God and the Catholic Church. This faith and love continued to grow and showed in all that she did and in the love she showed to her family. She will be dearly missed by the Ladies of St. Anne's Society and those that attended daily mass with her. Eileen lived at St. James orphanage until her early teens when she moved to Menasha to live with her uncle and aunt. After she graduated from St. Mary's, she worked at Kimberly Clark until she met and married the love of her life Francis L. Collar on June 29, 1946 at Ss. Peter & Paul Catholic Church in Hortonville. Eileen and her husband Francis farmed in Hortonville for almost 20 years. After a short time living by Northport they moved to Manawa and then to Weyauwega. Eileen worked at Presto Products for 20 years. She was a member of St. Anne's Society at Ss. Peter & Paul Catholic Church in Weyauwega. She was also a member of the Ladies Legion Auxiliary. She is survived by her children: Pat Anunson, New London; Mary (Mike) Jansen, Weyauwega; Sue Anne (George) Montgomery, Weyauwega; Lori Collar, Weyauwega; Donna (Roger) Besaw, Waupaca; Katie Weiland and her fiance Greg, New London;Genny Collar, Weyauwega; 16 grandchildren, 27 great-grandchildren and 4 great-great-grandchildren; 2 brothers: Irving (Gen) Partika, Hortonville; Fr. Richard Partika, Duluth, MN; half brothers and sisters: Donna (Don) Matteson, Marquette, MI; Dennis Partika, Hill City, MN; Robert (Barb) Partika, Duluth, MN; Sue (Richard) Busker, Woodbury, MN. She is further survived by nieces, nephews, other relatives and friends. She was preceded in death by her parents, her husband of 58 years Francis, son Dale, half-brother Tony, her mother and father-in-law Harold and Margaret Collar, Step-mother Dorothy Williams. The Funeral Mass for Eileen will be held on Monday, February 20, 2012 at 11:00 a.m. at Ss. Peter & Paul Catholic Church in Weyauwega with Fr. Brian Belongia officiating. Burial will be in Oakwood Cemetery in Weyauwega. A visitation for Eileen will be held on Sunday, February 19, 2012 at the Cline-Hanson-Dahlke Funeral Home in Weyauwega from 2-5 p.m. , and also at the church on Monday from 10:00 a.m. until the time of the service. In lieu of flowers, donations may be made to the St. Anne's Society and Theda Care at Home Hospice. A prayer service will be held at 4:30 p.m. Sunday afternoon at the funeral home. Mom, by your example you taught us the real meaning of motherhood. Your girls. A special thank you to the staff at Wisconsin Veteran's Home in King and also Theda Care at Home Hospice for their care and concern of Eileen.

To order memorial trees or send flowers to the family in memory of Eileen Frances Collar, please visit our flower store.