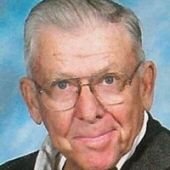 Earl Everett Eder, 89, passed away on November 10, 2014, after a short illness. Born January 9, 1925, to Elmer and Emma Eder, the youngest of three children, Earl lived his whole life on the family farm in the Town of Little Wolf near Manawa, WI. The farm has been in the Eder family for over 100 years. He attended Little Wolf Grade School and Little Wolf High School where he was valedictorian of the Class of 1943. Earl was a lifetime member of St. Paul's Lutheran Church in Manawa. Earl was a quiet and kind man of the land. He loved farming and was still driving a tractor doing fieldwork this past season. Earl was a much loved mentor to many young men who remained life long friends. He was loved in the neighborhood by new and old alike. Earl was a lifelong sportsman. An avid trap and skeet shooter, Earl was a long-time and active member of Bear Lake Gun Club and of the Faskall Gun Club. As a young man he enjoyed his hunting trips with his friends. They hunted big game in Alaska and the Rocky Mountain region, and they hunted pheasants in South Dakota. Earl loved following sports at all levels. His keen analysis and overall knowledge of the players and teams made talking sports with Earl a real pleasure. Earl was proceeded in death by his parents, Elmer and Emma (nee Schroeder) Eder; his sister, Eileen and her husband, Charles Cukr; and his brother, Eugene and his wife, Natalie(nee Bongey). He is survived by five nieces and nephews, ten great nieces and nephews and five great, great nieces and nephews. The family would like to thank all the people involved in the caring for Earl during his illness. He always felt like he was well taken care of and spoke kindly of all the doctors and staff. We also would especially like to thank Malcome and Amy Hathorne and Dale and Sue Gough for everything they have done for Earl. Earl, you who never complained, are deeply loved and will be missed more than you will ever know. A memorial service for Earl will be held on Monday, November 17, 2014, at noon at St. Paul Lutheran Church in Manawa with Rev. Vilas Mazemke officiating. Burial will be in Little Wolf Cemetery, Town of Little Wolf. A gathering of family and friends will take place directly at the church on Monday from 10:30 a.m. until the time of the service.

To order memorial trees or send flowers to the family in memory of Earl E. Eder, please visit our flower store.