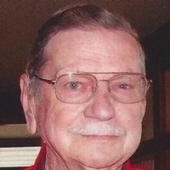 DuWayne P. Dobratz, age 86, of Manawa, died as a result of an automobile accident on Sunday, November 15, 2015. He was born on November 7, 1929 in Bonduel, son of the late August and Esther (Koch) Dobratz. On January 29, 1950, he was united in marriage to Anita Skoglund. She preceded him in death on February 14, 2000. DuWayne lived in Sturgeon Bay and Green Bay working in the grocery business. In 1969, DuWayne and Anita moved to Manawa and purchased Lakeside Foods working there until 1987. They then purchased The Country Drive Inn in Manawa and sold the business in the early 2000's. He is survived by his children: Kay (Keith) McClurg , Racine; Julie (Bob) Mikeworth, Henderson, NV; Glenn (Janet) Dobratz, Medinah, Il; a sister: Gina (Wayne) Wood, Pulaski; 3 grandchildren: Aaron (Jill) Timm, Manawa; Matthew (Bobbi Jo) Timm, Manawa; Erica Timm, Madison; 2 step-grandchildren: John and Jill Flanagan of Illinois; 9 great-grandchildren: Jacob, Megan and Jensen Timm, McCayla, Vincente', Cecilyah and Brody Timm, Lexus Finley and Molly Flanagan. He is further survived by brothers-in-law and sisters-in-law, nieces, nephews, other relatives and friends. Besides his parents and wife, he was preceded in death by siblings: Delores, Betty, Almira, Marsha and Richard; granddaughter Shelley Timm; great-granddaughter: Kierria Timm; and an infant great-granddaughter. The funeral service for DuWayne will be held on Friday, November 20, 2015 at 11:00 a.m. at the Cline-Hanson-Dahlke Funeral Home in Manawa with Chaplain Rich Engle officiating. Burial will be in Little Wolf Cemetery, Town of Little Wolf. A visitation for DuWayne will be held on Thursday from 4-7 p.m. at the funeral home and on Friday from 10:00 a.m. until the time of the service.

To order memorial trees or send flowers to the family in memory of DuWayne P. Dobratz, please visit our flower store.