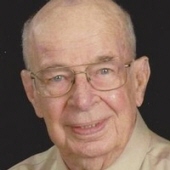 Donald Hayes Dion, age 82, of Manawa, died on Sunday, January 18, 2015, at St. Joseph Residence in New London. He was born on August 20, 1932, in Rhode Island, son of the late Clarence and Lillian (Fraser) Dion. On July 27, 1952, he was united in marriage to Carol Castner in San Francisco, CA . Don proudly served his country with the U.S. Navy. Don was one of the original 8 officers on the New Berlin Police Department and served there for 25 years. He was instrumental in setting up the New Berlin Emergency Government. He was proud to receive the Distinguished Award for Outstanding Community Service he received in 1967. He was one of the original organizers for New Berlin's Soap Box Derby. Don enjoyed spending time with his family, woodworking, tinkering with cars, motors, etc., loved working in his yard, was a big Packer and NASCAR fan, and traveling with his wife Carol. He was also a member of the Knights of Columbus. He was a member of Sacred Heart Catholic Church in Manawa. He is survived by his wife of 62 years, Carol; children: Steven Dion; Lorie (Stan) Kaminski; Donald Dion, Jr.; Kris (Susan) Dion; grandchildren: Joseph Dion, Peter Dion, Janelle (Kaminski) (Nathan) Hoffman, Nathan Kaminski, Katelyn Kaminski, Adam Dion, Garan Dion, Makinna Dion, Ryan Dion, Kurtis Dion, April Dion; great-grandchildren: Bumble bea Hoffman, Juniper Hoffman, Harbor Hoffman, Luke Dion; sisters-in-law: Pat Rupp and Jane Castner. He is further survived by nieces, nephews, other relatives and friends. He was preceded in death by his parents, son Bryan Dion, brother Robert Dion and grandson Jared Dion. The Funeral Mass for Donald will be held on Friday, January 23, 2015, at 11:00 a.m. at Sacred Heart Catholic Church in Manawa with Fr. Richard Lesniak officiating. Burial will be in the parish cemetery. A visitation for Donald will be held directly at the church on Friday from 9:30 a.m. until the time of the service.

To order memorial trees or send flowers to the family in memory of Donald H. Dion, please visit our flower store.