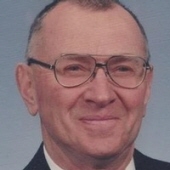 Age 91, Weyauwega went to his heavenly home on Saturday January 7, 2017, at Crossroads Care Center, Weyauwega surrounded by his loving family. Don was born on November 13, 1925, Town of Weyauwega, son of the late Bernhardt and Irma (Zietlow) Buchholz. Don attended St. Peter Evangelical Lutheran School and was confirmed at St. Peter Evangelical Lutheran Church. Don graduated from Weyauwega High School class of 1944. On May 18, 1952 he married the love of his life, Viona V. Buchholz, at Emmaus Ev. Lutheran Church in the Town of Lind. Together they celebrated 55 years of marriage. Don was a life-long resident of Weyauwega, residing on the family farm built by his parents and grandparents. There Don and Viona dairy farmed until 1985. Don worked as a technician at Presto Products in Weyauwega for 25 years. He was a welder at Friendship Travel Trailers, Waupaca and drove school bus for Weyauwega High School for 12 years. He was a member of the National Farmers Organization. Don was a skilled craftsman. He enjoyed constructing decorative iron railings as seen in front of St. Peter Ev. Lutheran Church and homes through-out the community. He also enjoyed wood crafting, especially clocks and birdhouses. Don’s strong work ethic and commitment shined through-out his life. He also believed in giving back to the community and for 19 years served as a volunteer at the Weyauwega Nutrition site (Meals on Wheels). Don was a linesman for the Weyauwega Phone Company and served as a rural volunteer fireman. Don was a life-long member of St. Peter Ev. Lutheran church, Weyauwega, holding positions both in church and the school. Through-out his life, Don was a loving and devoted husband, father, grandfather and great-grandfather.

A memorial fund has been established for St. Peter Lutheran Church.

To order memorial trees or send flowers to the family in memory of Donald D. Buchholz, please visit our flower store.