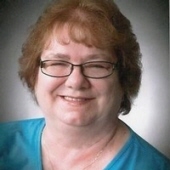 Deborah A. Preuss, age 63, Weyauwega, passed away peacefully at her home on Thursday, February 12th, 2015. She was born on September 12th, 1951 in the Appleton, daughter of Robert and Evelyn (Welson) Brightman. She graduated from New London High School in 1969, and was united in marriage to James Preuss on September 18th, 1973. He preceded her in death in 1987. Deborah worked at Fleet Farm in Waupaca until her retirement. Deborah is survived by children, John (Alissa); Joe (fiancé Nicholle Bondioli); and Jay; grandchildren, James and Erik; siblings, Jesse (Elaine) Brightman and Patricia (Jon) Christopher. She was preceded in death by her parents and husband James. Funeral services for Deborah will be held at Cline-Hanson-Dahlke Funeral Home Weyauwega, on Monday, February 16th at 1:00 p.m. with Rev. Greg Watling officiating. Visitation will be from noon until the time of service. Burial will be at Lind Center Cemetery, Township of Lind. In lieu of flowers, a memorial fund has been established.

To order memorial trees or send flowers to the family in memory of Deborah A. Preuss, please visit our flower store.