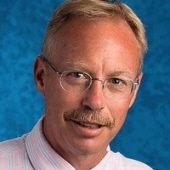 Dale Richard Oechler, age 56, of Weyauwega, went to his heavenly home on Monday, May 28, 2018 at his residence. He was born on September 2, 1961 to Richard and Virginia (Hoff) Oechler. Dale was baptized on October 8, 1961 at Friedens Lutheran Church in Kenosha and confirmed in the Christian faith on March 25, 1975 at Bethany Lutheran Church in Kenosha. Dale then graduated from Shoreland Lutheran High School in Somers, WI in 1979 and was a 1984 graduate of Dr. Martin Luther College in New Ulm, MN. Dale taught at Trinity Lutheran School in Jenera, OH for the 1986/87 school year. He was united in marriage to Corky Rettig-Inniger on July 29, 1989. Dale taught at St. Peter Lutheran School in Weyauwega, WI from 1987 until the present. He was a successful and devoted coach during his many years of service. Dale enjoyed spending time with his family, especially his 2 granddaughters. He is survived by his wife, Corky; parents, Richard and Virginia; son, Clair (Becky) Inniger; siblings, Marie (Gregg) Pfarr and Dona (Kevin) Buch; brothers-in-law and sisters-in-law, Kenny Rettig, Dee Dillman, Ron (Sue) Rettig, Gerry (Gary) Weihrauch, Robin (Kathy) Rettig, Ed (Jo) Rettig and Hope (Brad) Jolliff; and numerous nieces, nephews, other relatives and many friends. He was preceded in death by his son, Clint Inniger; mother and father-in-law, Eleanor and Richard Rettig; 1 sister-in-law, 2 brothers-in-law and 1 niece. The Christian Funeral for Dale will be held on Friday, June 1, 2018 at 11:00 a.m. at St. Peter Ev. Lutheran Church in Weyauwega with Rev. Matthew Crass officiating. A visitation for Dale will be held on Thursday, May 31, 2018 from 3-7 p.m. at Cline Hanson Dahlke Funeral Home in Weyauwega and again on Friday at the church from 9:00 a.m. until the time of the service. A private burial will take place at Sunset Ridge Cemetery in Kenosha. In lieu of flowers a memorial fund is being established.