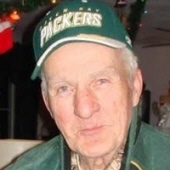 Clarence A Hartwig, 84, of Weyauwega passed away at Theda Clark Medical Center November 22, 2014, from complications following a stroke on October 30, 2014. Clarence was born in Deerfield WI. He grew up with 2 brothers on the family farm, graduated high school and worked for Globe Union in Milwaukee. He later married Donna Blasing in 1964 and had daughter, Renee. He resided in Iron Ridge at that time, where he worked for Purina feed mill and he also enjoyed being on a bowling league till Donna's death in 1970. He later married Bernice Thomas and relocated to Minocqua where he worked for Patterson Lumber and then later Jim Pecks Wildwood until his retirement in 1995. Due to Bernice's health issues, they moved to Combined Locks in 1998 to be near Renee until Bernice's death in 2002. Clarence then bought property in Pearson and resided there until 2009 when he returned to live with Renee and Lane in Weyauwega. Clarence was a hard worker, an avid Green Bay Packer fan and NASCAR fan. He enjoyed socializing with friends. He and Bernice hosted many neighborhood get together's at the house on the lake up north. He enjoyed working outdoors more than anything; often said it was where he felt the best and that was keeping him healthy. Most people will remember him for his dedication to his yard work and various outdoor projects he had going on. He is survived by daughter Renee Bisner, (Lane Pingel) Weyauwega; granddaughter Holly Bisner, (fiancé Jason Rioux); Manchester, NH; grandsons, Adam Bisner, Appleton and Tyler Vander Bloemen at home and also, step-grandchildren, Kayleigh Pingel and Blake Pingel, both of Appleton. Clarence was preceded in death by his parents, Julius and Bertha, wife Donna, 2nd wife Bernice and other family members. A gathering in his honor will be held for friends and family at the home of Renee and Lane on December 1, 2014, at 3:00pm. Renee would like to thank the physicians and staff at Riverside Medical Center, Theda Clark Medical Center, Weyauwega Health Care Center, the Aging and Disability Resource Center of Waupaca County, Cline- Hanson-Dahlke Funeral Home, and the team at Goodwill in Waupaca for all their assistance and comforting words during this time.

To order memorial trees or send flowers to the family in memory of Clarence A. Hartwig, please visit our flower store.