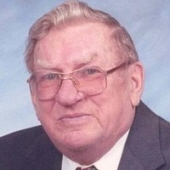 Carl Suehs Jr. age 82 of Manawa, passed away unexpectedly at his home on Friday, December 07, 2012. He was born on February 4, 1930 in the Town of St. Lawrence, son of the late Karl and Anna (Schwanke) Suehs. He was united in marriage to Loyola Patri on July 14, 1951 at St. Paul Lutheran Church in Manawa. Carl grew up in Ogdensburg and graduated from Little Wolf High School in Manawa. He worked for many years at the Curtis Co. in New London, then as purchasing agent for Trade Winds in Manawa, then Fliteway in Manawa, and finally was City Clerk for Manawa until his retirement. Carl was a lifelong member of St. Paul Lutheran Church in Manawa. He greatly enjoyed hunting, fishing and camping with his family. He also enjoyed reading, feeding the birds and squirrels, watching tv, driving around town "just to see", and especially visits from his family. Carl will be greatly missed by his four children: Jeffrey Suehs, Diane (Dennis) Thompson, Jerry (Jane) Suehs, John (Teri Rae) Suehs, grandchildren: Tory, Jesse (Erin), Shauna (Jake), Michael, Andy (Brenda), Ryan (Molly), Emily (Kris), David, Kristi, Joshua (Kayla); 11 greatgrandchildren, step-grandchildren and step-great-grandchildren; sister Muriel Rammer and his companion Black Kitty. He is further survived by nieces, nephews, other relatives and friends. He was preceded in death by his parents, wife Loyola, son James, and two sisters: Sylvia Collins and Evelyn Gertsch. The funeral service for Carl will be held on Tuesday, December 11, 2012 at 1:30pm at St. Paul Lutheran Church in Manawa with Rev. Vilas Mazemke officiating. Burial will be in Little Wolf Cemetery, Town of Little Wolf. A visitation for Carl will be held on Monday at the Cline-Hanson-Dahlke Funeral Home in Manawa from 4-7 p.m. and on Tuesday at the church from 12:30 until the time of the service. In lieu of flowers a memorial fund has been established. We love you, dad. Give mom and Jim a big hug for us, your kids.

To order memorial trees or send flowers to the family in memory of Carl Suehs Jr., please visit our flower store.