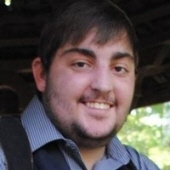 Age 24, Weyauwega, passed on March 26rd at the Children's Hospital of Wisconsin, Milwaukee due to complications after a heart transplant. Andy was born on October 1st, 1988 in Minneapolis, MN. Andy struggled his whole life with heart problems. Andy graduated from Weyauwega-Fremont High School in 2007. Andy was an avid fisherman and hunter, sports fan, musician, cook, son, brother, and friend. He persevered through every hurdle his condition threw at him, laughing through it at every turn. He was dedicated to his family and friends, and passionate about the woods and water. Andy is survived by his parents Doug and Brenda; sisters Liz and Kristi (Cory) Curtis; triplet brothers Tony and Rodney; grandparents Kay and Wendell Hillskotter, Dolores TerWisscha, and Theodore Richter; great grandparents Isabelle Hillskotter and Bernice Demulling. He is further survived by many aunts, uncles, cousins and many great friends. Andy was preceded in death by his grandparents Vincent TerWisscha and Trish Richter; great grandparents Orville Demulling, Joseph and Loretta Rainer, Rudolph and Marcella Richter and Herman Hillskotter. The funeral service for Andy will be held on Saturday, March 30, 2013 at 11:00 a.m. at St. Paul Ev. Lutheran Church in Fremont with Rev. Stephen Pope officiating. A visitation for Andy will be held on Friday, March 29, 2013 from 2- 7p.m. at the Cline-Hanson-Dahlke Funeral Home in Weyauwega, and on Saturday at the church from 9:30 a.m. until the time of the service. Burial will be in Oakwood Cemetery in Weyauwega at 2:00 p.m. on Saturday.

To order memorial trees or send flowers to the family in memory of Andrew V. Hillskotter, please visit our flower store.