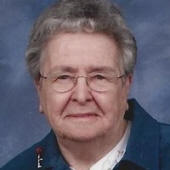 Alice Smith, age 97, Manawa, died on Wednesday, March 25, 2015. She was born on September 16, 1917, in Wild Rose, Wisconsin, the daughter of Gilbert and Janet (Lane) Stevenson. She was raised in Wild Rose and in the Town of Union where she attended Dellwood and Marble schools. She married Everett Smith on June 10, 1936 and lived on a farm in the Town of Bear Creek until moving to Manawa in 1989. Everett died on May 19, 1990. She was always the first one up in the morning and the last one to bed at night, busy with farm chores (although disliked driving the tractor), cooking/baking and gardening. After moving to Manawa, she enjoyed Friday night fish with the girls, playing cards and going to the Nutritional Center at noon on Wednesdays. For years, she enjoyed the Rodeo parade that went by her house. She always had a smile for everyone. Rarely did you hear an unkind word about anyone and she had a list of people that she prayed for every night. She is survived by her son, Dale, of Spencer, and daughter, Bonnie LeClair of Appleton, two grandsons, Paul LeClair of Appleton, and Jon LeClair of Milwaukee. Great-grandsons, Cole LeClair, West Bend, and Zack (Bree) Sowieja of Moose Lake, MN. Two step-granddaughters, Michele Enli of Phoenix, Arizona, and Nanette (John) Sowieja of Rifle, Colorado. Two great-great grandchildren, Carter and Emma Sowieja, and two sisters-in-law, Hazel Stevenson and Erma Stevenson, both of Clintonville, and a brother-in-law, Rev. Richard Brunner of Wittenberg. She is further survived by cousins, nieces and nephews, and many friends. She was preceded in death by her husband, parents, two brothers, Bernard and Orin Stevenson, and son-in-law, Roger LeClair, as well as brothers and sisters-in-law, Elearnor (Walter) Petrie, Harold (Thelma) Smith, George (Dorothy) Smith, Leona (Ray) Jorgenson, and Hazel Brunner. Her funeral will be on Monday, March 30, 2015, at 11:00 a.m. at the Manawa United Methodist Church where she was a long-time member, with Rev. Dale Eggert officiating. Visitation will be from 9:00 a.m. until the time of service. Mom wanted to thank her wonderful friends and family, as well as Rev. Dale Eggert and her church family, for being a part of her life. Her family would like to thank the Manawa Community Nursing Center and the many angels that work there. Their care and compassion were greatly appreciated.

To order memorial trees or send flowers to the family in memory of Alice C. Smith, please visit our flower store.